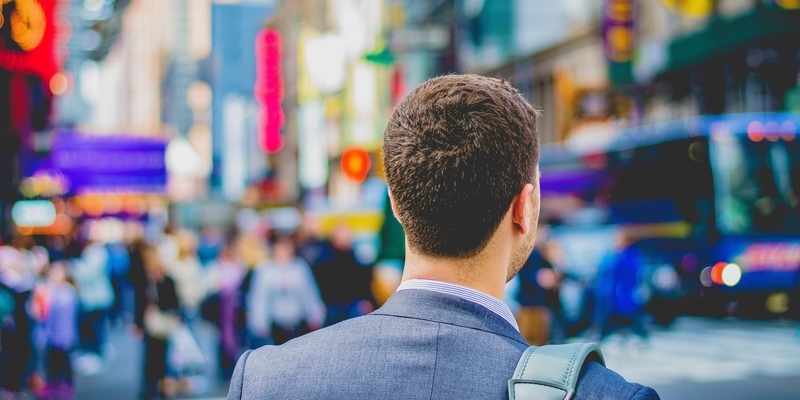 When I graduated from USC six years ago, I learned fairly quickly that networking is one of the best resources you can use to craft your career trajectory. Since then I have leveraged professional connections to get into every sales and business development job I’ve had.

If you’re looking to advance your career in sales, hopefully my experiences can help you get a leg up. Here’s how I got where I am:

Starting out as a college grad

During my time at USC, I helped found an organization called the Kairos Society. Through that organization, I met the founder of Humantelligence, which enabled me to get my first Business Development job.

I knew I wanted to be in a revenue-generating position and I learned quickly that at a startup, if you can generate revenue, you’re valuable. One of the best ways to generate revenue is through sales, so that’s where I began to focus my efforts.

If you’re interested in a sales career, this type of position is a useful entry point; you will be working hard, but the challenge will teach you valuable skillsets. At any B2B company, you can demonstrate your value if you can generate top-of-funnel activity. At Humantelligence, I helped generate around $500,000 in revenue to support the company’s growth.

I recommend that young professionals stay in early positions for at least two to three years. That shows future employers you can commit. Sticking with one company for an extended period provides you with opportunities to get your hands dirty working on increasingly complex projects, allowing your skills and confidence with responsibility to mature. After all, you will be working on bigger deals in year three than your first year!

After three years, however, I felt ready to move on.

Moving to my next startup position

In my search, I knew I wanted to stick with sales. I worked with a recruiting firm after narrowing down my search criteria. Recruiting firms can do so much for you: find opportunities, get you in front of employers, offer feedback and even help to negotiate your contract.

The criteria I developed were fairly simple: post series A SaaS company (well financed), Account Executive role with an inspiring leader and people. The more specific you can be with your criteria, the better. Take the time to think about what’s most important to you.

As soon as I visited Grovo, I knew I wanted to work there. The people were great and it was the type of company where I could see myself thrive. With 35 employees, Grovo was just the right size to boot. They had just completed their Series A funding and were growing quickly with an inspirational founding team still intact.

Within two weeks of meeting with a recruiter, I had a job offer as an AE. Over the next 2 years, I grew with the company, entering a management position within six months. At Grovo I sold the product, worked in business strategy, and collaborated with the executive team to build a sales machine. I had a lot of ownership over company success, which was tremendously empowering.

I loved the people I worked with at Grovo. Furthermore, even though I worked harder than I ever had in my life, I didn’t mind staying extra hours when it was necessary to help my team succeed. That’s the kind of position you want be in!

Transitioning to a new role in outside sales

After two years I was a bit burnt out and felt ready for something new. At this point I had two tenured (by millennial standards) experiences at startups. In both cases, I received promotions and had recommendations from the CEOs for future positions. At this point, I could tell a detailed story of my career: I began working in top-of-the-funnel sales, and then gained experience as an AE and in management. When you can show a track record of success that tells a story, the opportunities will be there.

After I left Grovo, I spent seven months doing consulting work with Skaled. I knew their founder Jake Dunlap from having worked with him at Grovo. Since Skaled works with many growth stage companies, I was able to develop a high-level understanding of how different SaaS sales models were being built.

While startups had been a great way to jumpstart my career, I decided that I wanted something else. I conducted a job search and ended up with four or five job offers, including ADP. I knew a team within ADP from partnerships I had worked on at Grovo and Skaled, and decided that this was the next step I wanted to take my career.

For the past six months I’ve been in sales at ADP. We do a lot of outside sales, which is relatively new to me. My position is best described as a sales quarterback. I’m basically an AE, SDR, and strategic account manager. A BD consultant does discovery calls and demonstrations for me, and a solutions consultant helps consult with prospects. I do the rest, including closing, negotiating, and consulting. ADP offers 46 different products, and it’s critical that we offer every customer the right mix.

Most people at ADP in my position rose up from the inside, but they value my perspective because I’ve had outside experiences. ADP is an established company, but we’re very interested in innovation. ADP has an innovation lab and a ventures lab in New York, which almost function as well-funded startups. It’s a pretty unique blend of “stability and innovation.” A lot of other established companies—like IBM and Microsoft—are doing similar things. These companies can be great places to work for people inclined towards startups that want that stamp of approval on their resume.

What I’ve learned working in sales and management

In working in these different positions, I’ve developed a strong understanding of the sales process. Managers are most effective when they have experience in selling the product. My current manager sold at ADP and is able to provide valuable insights as a result. As a salesperson I find it hard to fully trust a manager who is so absconded in an ivory tower that they never talk to real customers.

I plan to get back into management someday, but right now I’m learning a lot of sales that will be valuable in the long-term. It’s also a great way to earn some good income along the way!

If you can get experience in both sales and management, I recommend it. You should be humble enough to recognize that you might need to switch between the two in order to become the best contributor possible. Even if you plan to go the entrepreneurial route, it’s great to work for someone else early in your sales career so that you can network, upskill yourself and still get paid.

At the beginning of your career, I’ve found the story is the most important part. Focus on building a resume that tells a story and clearly illustrates the value you bring to the table.

Ryder is the Co-CEO & Owner of Alros Label Co, a company in Los Angeles specialized in label manufacturing business. He was also a Strategist at ADP focusing on Major Accounts, Business Development & HCM. Prior to ADP, he held sales and consulting positions at Skaled, Grovo and Humantelligence.