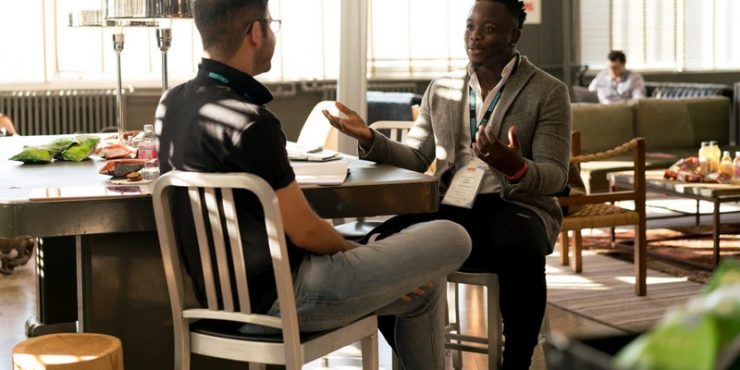 7 Traits I Look for When Hiring Sales Talent

Hiring sales talent is hard. There are a lot of salespeople out there, and you’ll get inundated with resumes as soon as you put out a job ad.

How do you pick the best rep for your company? What should you look for in your applicants? How do you know if they’re going to be successful or if they’re just good at talking themselves up in the interview?

I’ve been hiring salespeople for 17 years, and I’ve found that there are seven things sales reps need to have if they’re going to be successful. That applies to reps looking for their first jobs just as much as it does to people with decades of experience. Now I look for those traits when I’m hiring—and keeping them in mind has helped me hire some phenomenal salespeople.

Use these seven qualifiers when you’re hiring your next salesperson, and you’ll be a lot more likely to hire a good one.

Effective follow-up is one of the skills that set the all-stars apart from the average sellers. So I look for people who instinctively understand the power of following up.

Sure, you can teach someone how important it is. But if they already understand its importance, they’re a step ahead. And if they know how to do it, they’re about as close to a sure hire as you’ll find. Following up is how deals get closed, and if I don’t have to teach that to someone, they’re a strong contender in the hiring process.

I always keep an eye out for applicants who follow up skillfully during the interview process. If they’re already using the follow-up tactics we like to see at Close, they’re a strong candidate for the job.

If, on the other hand, they have annoying follow-up tendencies, they’re pushed down the list. A sense of desperation or accusation in their follow-ups is an immediate disqualifier. That’s not how you win sales, and it’s certainly not how you get a sales job.

There are three parts to a great sales close: asking early, asking often, and embracing the no. Some salespeople get flustered when a prospect says no. They might just accept that as an answer and end the call. They might start in with awkward follow-up questions or get defensive. That’s bad.

What they should do instead is dig deeper to find out why the prospect isn’t ready to buy. “What’s the process we need to go through to get you ready to buy?” is one of the most important questions in any of our sales reps’ arsenal—largely because we ask for the close early and get a lot of nos.

This is especially true in the modern sales age. Many of the high-velocity sales teams I know are using technologies like predictive dialing. That means reps are talking to a ton of people every day. So they’re hearing a lot of nos. And they have to be able to handle it and not trip up over their own ego.

3. Responsive to feedback and eager to learn

Everyone says they’re open to feedback, but few actually are. By the end of an interview, I want to know how an applicant handles feedback. I want people on my team that are not only open to constructive criticism but actually, seek it out. If they want to learn, I want them on my team.

But it goes further than that. They need to be able to put that feedback into action. This is astonishingly rare. Just because someone is open to feedback doesn’t mean they’re good at putting it into action. Some sales reps need to be told over and over to make a change.

When you find someone who not only seeks out feedback but actually makes a change in their selling when you suggest it, you’ve struck gold.

This seems like a no-brainer, but there are career salespeople out there who are just bad communicators. And they keep getting hired. I don’t get it.

When I hire a rep, they need great communication skills. They need to have empathy and be able to read a prospect. They need to have a sixth sense for what to say next. They need to be a fantastic listener. That’s one that people miss out on a lot—salespeople spend a lot of time listening instead of talking, and the best sellers are especially good at listening. (We’ll talk about that more in a moment.)

But communication skills go beyond the phone; a lot of modern prospecting and selling happens via email. So they need to be able to write well, too. Tons of typos and weird sentence constructions just aren’t going to fly in a high-performing sales organization. You want people who can present a professional face for us and use their communication skills to close deals.

Salespeople spend most of their time interacting with people—and not just prospects. They also interact with other team members. So they need to have a positive energy that lifts up the people they interact with.

Even if someone is a great closer, you don’t want them on your team if they’re bringing people down. Positivity is part of it, but an openness to learning new things, being accepting of other people, and a genuine interest in building relationships are crucial.

This can be hard to intuit in a short interview, but it’s something to pay attention to. If you’re checking references, be sure to ask about the kind of energy this person brings to the workplace.

The all-time greats in the sales world tend to be very competitive, ambitious people. They’re go-getters. They ask for forgiveness instead of permission. Using sales incentives is a great way to motivate your reps, but the top performers are motivated by their overwhelming drive to succeed.

This kind of rep also responds really well to some friendly competition within your team. Competition is one of my favorite ways to motivate and engage reps; salespeople love winning, and if you can get them competing with one another (on a friendly level, of course), they not only get an extra dose of motivation, but they have fun with it.

Striking a balance between a strong drive to close deals and the helpfulness people have come to expect in our relationship-based-selling era is tough. But reps who are driven to win and want to improve will find that balance. And they’ll become some of your best reps.

I mentioned this once before, but it’s so important that I’ll bring it up again. Everyone seems to think that great salespeople are fast talkers, able to sidestep any objection and get the prospect to buy no matter what. And that’s valuable. But listening is even more valuable.

It’s counterintuitive, but reps who actively listen and ask good questions maintain control of the sales conversation. They get the prospect to do the work for them by sharing their concerns and coming up with their own ideas to overcome them.

By gaining a real understanding of the prospect, what they need, and what their concerns are, your salespeople are put in the perfect position not just to close a deal, but to help that prospect. That’s what gets you deals and long-term customers.

Every company has different needs for their sales teams. But keeping an eye out for these seven traits will help you get the best reps every time.

Not everyone will have all seven of them right away. You also need to watch for people who are willing to learn these skills and traits. Sometimes you can teach them. Sometimes you can’t. But the more open your applicants are to learning and developing skills, the better.

This is a guest contribution by Steli Efti of Close. Interested in contributing to the CloserIQ blog? Check out our guidelines here.

Steli Efti is the co-founder & CEO of Close, an inside sales CRM that allows users to make and receive calls with one click, automatically tracks all your emails, and minimizes manual data-entry.