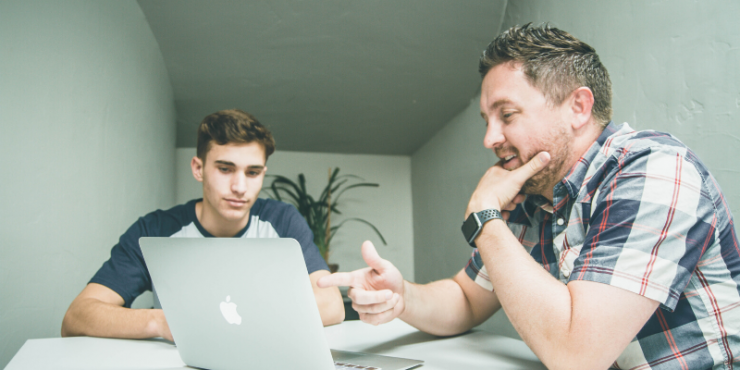 How to Give Better Feedback in Your Sales Team’s 1:1s

What’s something that we all love to receive, but hate to give? It’s not gifts, unless you’re mean. It’s feedback. We can’t get enough feedback from our managers and bosses, but when it’s time to dole out some of our own to direct reports, many of us tend to clam up.

Studies show that 75% of employees believe feedback is valuable. And even 92% saw value in negative feedback, provided it was delivered appropriately. People want to know when they need to improve.

Yet in a separate Gallup poll, “only 26% of employees strongly agree that the feedback they receive helps them do better work.”

That means, even when we are giving feedback, we are doing it ineffectively. We’re not getting our points across. We’re afraid to say what needs to be said. And when that’s the case, everyone suffers—the employee, the manager, and the company as a whole.

Feedback is especially important in the world of sales, an industry that is both data-driven and emotional. Through feedback, salespeople gain valuable perspective, insight, and motivation. Quality feedback can be the difference between success and failure, for SDRs and sales executives alike.

If you’re in the position of giving regular feedback to sales team members in regular one-on-ones (or you have your eye on moving into a sales management role and want to get a jump on this process) and need some guidance on how to improve, these tips are for you:

1) Be intentional in giving feedback to your reps

If you’re a manager or otherwise in a position of giving feedback to direct reports, the odds are good that you were once in the shoes of the person sitting across the table from you.

“Don’t forget what you liked, and you didn’t like, about the feedback you received as a sales rep,” says Ashley Margraf, Sales Manager at Fundera. “I’ve had many different managers, and I still remember the ones that I just resonated with, and made me feel empowered. I also know the ones who I didn’t like—how they delivered the feedback, the setting we were in, and the tone of the meetings.”

The feedback you give someone can stay with them throughout their career, which means every time you sit down with them, you have a chance to affect their long-term success as well as their short-term. Good feedback can boost employee morale and engagement. Be empathetic, understanding, and don’t lose sight of how the roles were once reversed for you.

2) Suggest behavior modifications by highlighting the importance of personal branding

Sometimes, especially with young reps, it can be difficult to give perspective on how their work today, or this week, or this month, can have a ripple effect going forward. An effective way to present this feedback is by talking about “personal brand.”

“If someone’s attitude is negative, conversations start around that person’s ‘personal brand’ and how they’re perceived within the office. That brand hinders their growth,” says Margraf. “But phrasing it as personal brand helps them understand that people are talking about their performance, but with a professional twist to it.”

Essentially, it’s not a good look to walk into a meeting and say, “People are talking behind your back about how you’re affecting their experience here.” By framing your criticism around their personal brand, you are mixing the personal with the professional, and that resonates with people in a much more effective way.

3) Back your feedback with verifiable data instead of personal impressions

Sales is a numbers-driven game. It’s also a very emotional job that is often affected by factors outside of the rep’s control. As a manager, you should use both metrics and personal experience to inform your perspective.

“I use the metrics to diagnose where there might be a knowledge gap. I also listen to their phone calls; I’ll do different shadow sessions with each of them once a week, outside of our weekly one-on-ones, where I’m able to just hear the phone calls and get a sense of how the conversations are going with the clients,” says Margraf. “Then I combine the metrics and the conversations I’m listening to to form one clean and concise summary of feedback for them on where they are—what they’re doing well, but also where we still need to work.”

4) Bring examples to the table and encourage self-evaluation

Whether you have good or bad feedback for a rep, or both, it’s important to convey what you want to say in a clear, concise manner. It’s easy to ramble or go off on a tangent if you don’t have a point, basically.

A good way to frame your feedback in simple, concrete terms is through examples of the work the rep has done. Mention real-life scenarios about how they performed in specific tasks and ask them to take a moment and evaluate their actions. Encourage them to think about a better course of action that could have improved their results in the past.

“The most difficult part of feedback is being organized in what you’re presenting and providing specific examples—examples of both what they’re doing that’s good and bad,” says Margraf.

Feedback isn’t feedback unless you’re giving this person something they’re actually able to absorb and implement. If you come to them with examples of how they’ve already performed—on a call, or in a sales meeting—you make it easier for them to imagine alternative behaviors and outcomes.

5) Keep a record of your key takeaways for every 1:1

In the course of your one-on-one, it’s easy to get carried away by the conversation. You need to be present with the person you’re talking with—actively listening as well as talking. It’s easy to get sidetracked and forget the things you discussed during the conversation. When that happens, it would be hard to track your progress and visit your action plan to evaluate which courses of action helped your reps improve. Diligence in keeping a record of your discussions can improve the quality of your sales 1:1s.

When preparing for a one-on-one, Margraf says she always looks at the notes from her previous talk with a report. “That way, I make sure I’m up to date on what they did the week before.”

6) Be empathetic in delivering feedback but don’t sugarcoat issues

One of the biggest buzzwords around feedback, and around work culture in general, is “transparency.” Transparency means different things to different people, but at its core, it’s about being honest.

And everyone loves honesty, until it’s time to be honest about someone’s negative performance. But Margraf’s favorite managers have always been the ones that didn’t sugarcoat things.

“Rather than acting like everything was going fine when it really wasn’t… I typically resonated more with the people that were almost too honest, and probably gave me more information than I was asking for,” she says.

Luckily, if you follow some of the above steps, relaying negative feedback is rather simple. If you have examples of how their work isn’t cutting it, have notes documenting your previous conversations, and approach the conversation respectfully and with empathy, all you’re doing is laying out the information you have in-hand.

7) Deliver feedback in a tone that conveys support and respect

Few one-on-ones should be strictly business, or strictly about personal matters (and in fact, the latter isn’t a one-on-one, it’s just you hanging out with someone at work). The best meetings have a mixture of the two.

“I like keeping them casual in the beginning—catching up, seeing how things are going. And then if there are sales metrics that need to be addressed, we go into that,” says Margraf.

You can hire the best employees, but sales is such an emotional roller coaster, and every day can be a battle to stay personally motivated. That’s why Margraf considers asking about how people are feeling to be a priority in her meetings. She doesn’t ask it first to get out of the way—but because it takes precedence.

“To be in sales, you have to have that fire in your belly. But I think that my number one job is to make sure that when that fire dims, that I’m there to help bring it back to life. So, the emotional state, the mental state—that is the number one priority for me. The metrics and the pipeline funnel, those come right after.”

Your sales reps thrive on positive reinforcement. Make sure you let them know when they’re doing great and express your support when they’re struggling.

Even with all this advice, it may not be easy for you to turn around and deliver concrete, actionable, thoughtful feedback to every rep you manage.

Unfortunately, there’s no quick fix here. But, it gets easier every time. Just as with anything else, giving good feedback takes practice.

Eric Goldschein is an editor and writer at Fundera, a marketplace for small business financial solutions such as business loans. He covers marketing, finance, entrepreneurship, and small business trends.